Will Police raid any vaccine production facility where the Jews have planned and execute their Holocaust of millions of Christians on Purim Day ? No? Why not ? We are in the Jewish New World Order now. The antiChrist Great Reset is under implementation by askeNazi Klaus Scwab and the rest of his Nazis. And the Jewish Jerusalem Post that is announcing this. The Bible predicts there will be worldwide problems for Christians all over the World. Implementing their Corona-Covid kingdom of Satan.

Now we will soon see extreme hatred against Christians unfold in free dressage, as against Pastor Tupirani da Hora Lores in Jesus Christ Church of Rio deJaneiro where the Jews have instructed to get this christian pastor arrested, and might have instructed the authorities of the nations of the World that the death penalty should be the instrument to silence Christian dissenters to their tyranic satanic antiChrist rule.

The second law Gog & Magog Jews Lenin (Blank) and Trotsky (Bronstein) introduced into the Soviet Union in 1917 was the death penalty for «anti-Semitism.» Now it’s here.

We wrote this article in support of our Christian brothers and sisters in Brazil (translate by english flag on the right column):

Do you want to deny Jesus (Matt. 10:33) to stay friendly with these cruel Zionists and Jews, who can easily be transformed into cold-blooded murderers a little further down the road?

I hereby warn you against that ! IF you deny Jesus Christ to please some Gog&Magog Jews, you are lost for eternity. Don’t do it please. We care for your soul., not for your miserable life here. The Jews might kill you, get you arrested and killed of course, they are evil enough to do it, 66 million in USSR, but you will have saved your soul.

It seems a little strange to us that the Jerusalem Post so kindly wants to announce how much power over the authorities of the nations of the world and the police the Jews really have, but it actually seems that they boast of this power of theirs, over the Brazilian authorities and police, as Norwegian of course .. no difference.

«The pastor “should have been detained,” Rabbi Gilberto Ventura, the Sao Paulo-based founder of Sinagoga Sem Fronteiras, told the Jewish Telegraphic Agency. “But the fact police raided his church is already a big development.”

Yes, we know. The Jewish community would probably rather have had the death penalty as in the USSR. They will demand it a little further down the road. The nations ‘authorities’ will jump when the Jews say jump, all the nations leaders are as of today bought and paid for by the Jews. If there are two sides in a conflict, both sides are controlled.

Pastor Tupirani da Hora Lores is completely right. Those who make a grave for others might easily end up in it themselves. Completely deserved.

Jesus said that everyone reaps as we sow. Jesus did not mantion any jews was exempted from this. When the Jews have planned such a wonderful Purim Holocaust of Christians, and other peoples of the world, should we believe that a just God is with evil people, or should we believe that Jacob-Israel, and Jesus’ God is a God of Righteousness and Goodness?

Zionists «Christians» do not love jews at all, because if the Zionists knew the message of the Bible, then they should know that God punishes injustice, murder, vaccine industry for murdering billions of people to make money .. GOD WILL NOT BE HAPPY WITH THIS !

Read the Bible, for God’s sake, the Prophets of old, and the Revelation, especially.

In their wet dreams. Only for very short time says the Bible.

Jewish BenGurion stated how it will be, in the Christian Holy City, where our Savior and Messiah walked, to celebrate all their Pride perversities there. We do not think it is postive that satanic antiChrist Soviet-Jews of Gog&Magog atheists blaspheme the Holy City, on the contrary, even God will hate it. 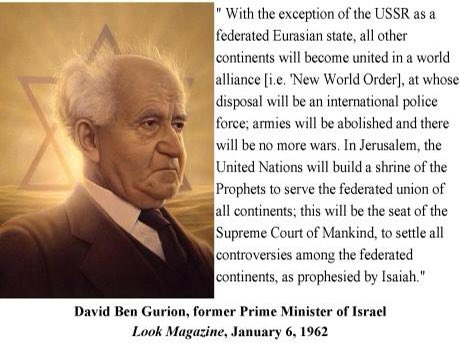 So those who love the Jewish people, all people, they warn them and remind them of what happened the last time they broke the Law and the commandments; they killed Jesus!

The temple curtain was torn, thunder and lightning, the whole temple of Salomon the Satanist collapsed, and their whole family was sent as a pariah caste into the world in the diaspora, NO ONE wanted them to live with, they were expelled from 119 countries because of their poor character traits.

To love one’s neighbor as oneself is to warn them of this .. beg them; please do not go too far in your evils and greed now, then God MUST intervene .. there is not a single vicious empire of theirs they controlled who have survived … remind them, not Egypt, not Rome, not Babylon they loved so much, not their USSR, not their USSA .. not even the British Commonwealth they took control of in 1694 .. They are in other words, completely failed freaks, it had been much better for the world if all of them had been a stain on their mother’s sheets.

Summa summarum; I will be very happy the day God has cleared the world of wicked people.

God’s Word is crystal clear that those who blaspheme the Holy City where Jesus walked in dirty leather sandals they will go up in flames, Rev. 20:9.

Pastor Tupirani da Hora Lores in Rio deJaneiro is completely right. The Gospel of Jesus Christ say
«[compassed, means they have taken sole power in Jerusalem] the beloved city and fire came down from God out of heaven, and devoured them». – Rev. 20:9.

This is Gods Word. Do the Jews like to arrest God next time ? LOL 🙂 Do not make me laugh. Some Jews of Chaiphas, Herod, Jude or Barrabas calibre is of no problem for God to Holocaust. He will let their own plans for other peoples come over their own heads. That is the LAW of God !

We are going to end up with world government. It’s inevitable … There’s going to be conflict, coercion and consensus. That’s all part of what will be required as we give birth to the first global civilization.