Muslims and Christians may strategically unite against Jewry, and against the anti-Christ in the Third Temple in Jerusalem. You will never hear me agree and scream as the gullible masses that is social engineered to claim the Muslims are the root of the World evils. I say they are social engineered to say so, easy preys for the Builders (Freemasons of B’nai Brith), but they can just read my article and wake up. It will do them good. Please be my friend and like and share if you agree.

Report from the Tribe of Naphtali in Norway to our Israelite family overseas (Gen 49:21, Isaiah 9:1-2).

There is no Judeo-Christian values or history. It is a ruse and deception to say so. It is an oxymoron. Christianity and Judaism is opposites, as we know from the Jews anger of Jesus Christ claiming Himself to be the Messiah. They felt that he was not a proponent of the Abrahamic and Mosaic tradition and religion, although Jesus fulfilled every little requirement in the Bible to be the ‘Annointed One’, and He put an stop to their ever growing megamaniac ideas that their messiah should help them rule the whole World (New World Order), so they created for themselves in their minds an egregore god that will help them with this, and that became Satan. 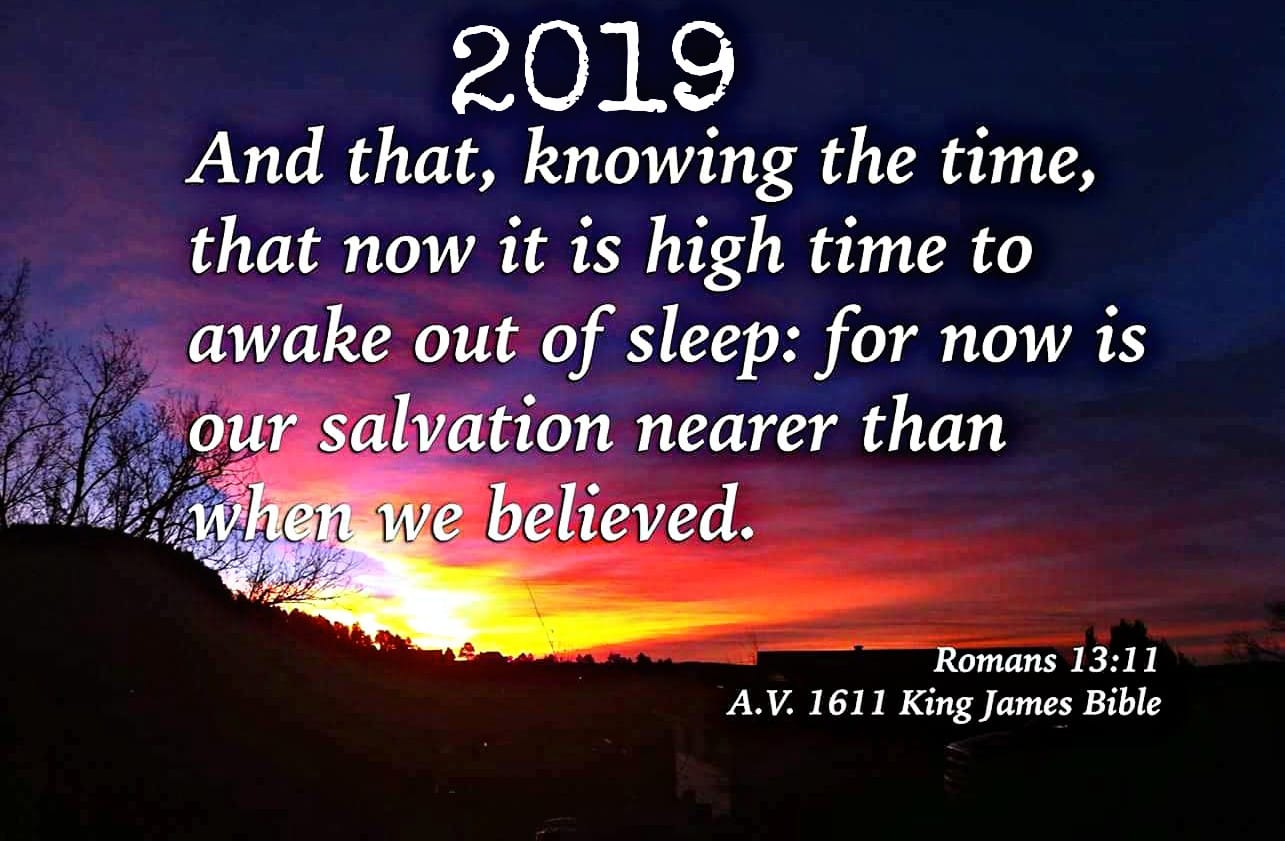 People who are angry at the Islamists, and lash out on them at each and every opportunity, should be double angry at the Jews, but that they never are (?). You will see that the people who is fanatical anti-Islam, they are NEVER also fanaticial anti-Jewish religionwise (not racewise). Hate against muslims is created by the Powers To Be for a reason, by bringing and mixing all other religions to Christian nations, they are actually CREATING racism. And the Jews and Israel need to clear the Middle east for it’s poplations for the Eretz Israel project, so they need to export the populations to us.

Is it only cowardness that make them not see the elephant in the room? 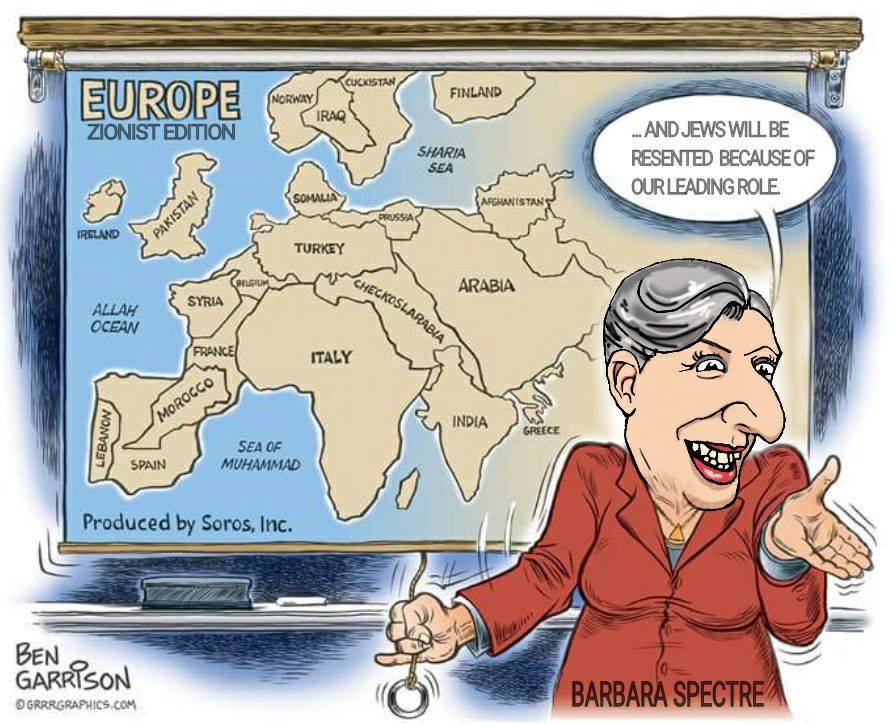 Before this all people in Christian nations found it exotic and nice to visit nation of other religions, but when the Babylonian Jews wanted to remake multicultural Babylon, the satanic rabbies KNOW it will end in blodshed, murder and wars, because this project have never been successfull before in the history of the World, so they do this for pure evil, to create the strategy of tension that shall help them come out as the Masters of the World, ‘last man standing’.

That is because this people have fallen victim to the Builders (Freemasons of B’nai Brith), building the opinion of people, social engineering in the Christian World, to hate the Islamists, and vice versa in the muslim World, because the Jews want the Muslims and Christians to jointly vipe each other out, so the Jews can sit on top of the World afterward. Luckily most of the muslims are awake enough to see that it is the Jews that controls and lead the warmachine of USA and NATO, not white Christian people.

Jews always get the ‘gentiles’ to slay each others. American young boys is doing their wars, due to the corruption of American political class (as ours here in Norway). The ‘power of the purse’.

Wars are Jews harvest it is said (of souls). 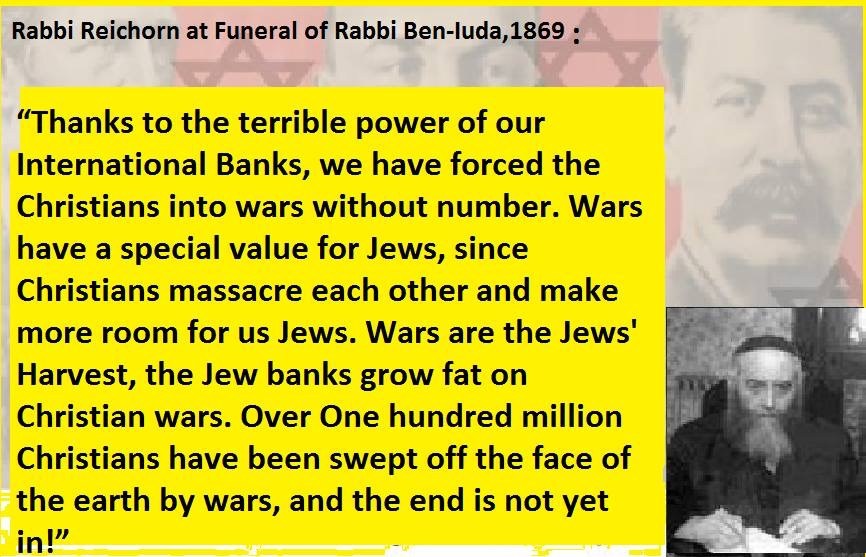 Islamists and Christian should NOT unite their religions in an ecumencal way, to adjust to one another. The co-operation should be just asure that we both can live safely withhin the borders of our own nations, and make sure that the Jews don’t plan and make havoc, killing and misery in our nations.

More like a political union, not religious. We do not need to co-operate by joining into the ekumenic luciferianism that i.e. the Pope is working to do in service for the Master race; a symbiosis of all the religions of the World. That is wrong, each and every nation should have a religion as suit them best, and all will evolve from there.

So Islam and Christianity should unite and kick back the Jewish agenda of their New World Order, so both us Christians and Muslims can live peacefully together in the World in our nations. All «witnin safe borders of their habitate» as the Bible different tribal peoples should live, according to Abraham, Moses, Jacob and Jesus’ God.

«The stone that the BUILDERS rejected has become the cornerstone.» – Psalm 118:22

«Jesus said to them, «Have you never read in the Scriptures: ‘The stone the BUILDERS rejected has become the cornerstone. This is from the Lord, and it is marvelous in our eyes»? – Matthew 21:42

«He is ‘the stone you BUILDERS rejected, which has become the cornerstone.» – Acts 4:11

It is working in Nigeria, it can work for the rest of the World:

«It is the shared view of many Nigerian Muslims and Christians that Boko Haram grossly distorts the Islamic religion by claiming it as a justification for its violent terrorism.»
https://www.rfpuk.org/nigeria-muslims-and-christians-unite/

I wonder if there is any jewish persons involved in the creation of Boko Haram to divide and conquere (like ISIS)?

Parts of Islam, like they created ISIS, was probably inspired by Jews and Jewish persons to divide and conquere the Middle East, så as many as possible should not be Christian, as the movement after Christ was a Joseph ‘burning Flame’ in the time of Mohammed. The Jews needed to take action, they failed, Jesus won.

Islam view Jesus Christ as a Prophet, and Mohammed put Jesus Christ in high regard, that we can not say about the Jewish Talmud.

There is just one small thing that is placing Jesus in antoher spiritual office than the other Prophets; Jesus Christ is litterally the bridge to God, he healed with His own life the fall of mankind symbolical the fall of Eva and Adam into sin, and reunited men with God.

Without Jesus sacrifice, there is no salvation. A valid sacrifice must shed blood (Hebrews 9:22). Jesus did so, Mohammed didn’t do this.. Jesus shed His own blood, not the blood of innocent animals, as the Jews are about to re-instate in the Third Temple in Jerusalam, where Jesus Christ is the ONLY Way to reconcile humans with God (John 14:6).

There is just a few simple things that Islam could adjust in order to be Christian. God don’t care if we in different translations call Him God, G-d or Allah. God created the different languages in order to separate humanity after the Babel project in Babylon where mankind tried to ‘reach the Heaven’ and be ‘god alike’, so God understands the differences in language excellent. No problem. 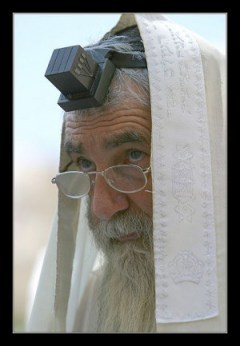 Probably a few minor things I could have added, but hopefully I have made my point.

2000 years later, the Jews have again navigated to the point where they believe and state openly that they are at the closing of the their aspirations, their New World Order. Where they shall rule undisputed. Speaking for myself, I have no intention to bow my legs to any Jew, that would be contrary to my religion; Christianity, the Way, that men is to have one Master only; God, and to do this would be idolizing.

The Zionist Plan to Take Over the World

In the Jewish New World Order the Capital of the World will be Jerusalem with anti-Christ on it’s throne, the animal sacrifices reinstated, and Sannhedrin in the Third Temple will be Worlds Supreme Court as per Noahide Laws, sorry to say Mr. Trump is MR: NEW WORLD ORDER… 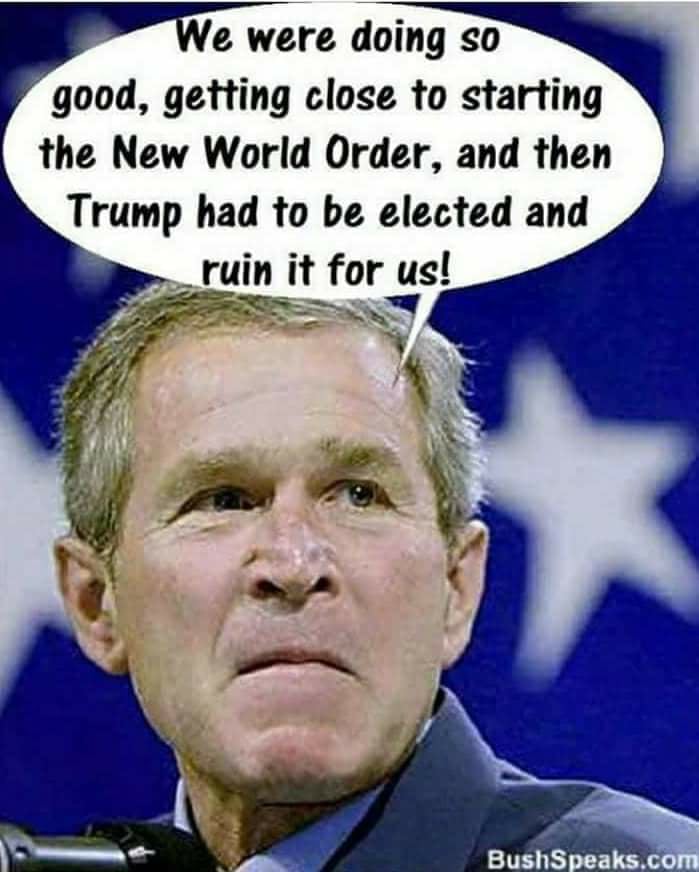 Mr. New World Order himself , in Service for the Jews…

Trump is bought for a silver coin, or some shekels… they rescued him when he was almost bankrupt, now is the payback time..

Don’t for one minute believe that Putin also is not paid and bought by the same people as Trump.

Control both sides of any war, and you are certain to win. Any war needs two ‘sides’, in eality there is one side that sets two sides up agauinst each other, both sides report to the same Masters, the Master race.

Dogma demand authority, rather than intelligent thought, as the source of opinion: it requires persecution of heretics and hostility to unbelievers: it asks of its disciples that they should inhibit natural kindness in favor of systematic hatred.