Our bodies is a Temple of God, 1 Cor. 3:16, Acts 17:24. Satan wants in to sit on its Throne (2 Thessalonians 2:4), replace God and Jesus Christ. We come into the World as humans, potential Temples of God, and should die as humans, naturally (not as a humanoid biorobot cyborgs man & machine transhumanism). You should die only once, say the Bible (Hebrews 9:27). You will have to die twice. First spiritually, than physically. Mark of the Beast is a number (666). Modify the number of human DNA Chromosome with Technology and you have a controlled Beast (cattle). 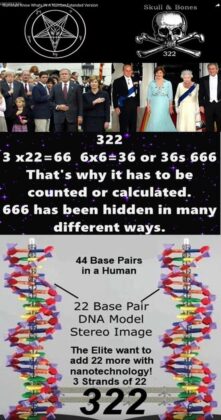 If you allow them to do this to you, God and the Holy Spirit can not enter anymore. The Holy Temple will be compromized. You will not any longer be created in the image of God, but in the image of (((Bill Gates))) and (((Klaus Schwab))) and the Synagogue of Satan, ref. Rev. 2.9 & 3,9. Only demons will live there, in you.

Selling You Safety, But Only Control!! by Nicholson1968

Anthony Patch speak about DNA manipulator (mRNA), and nanotechnology in vaccines, in 2014. Long time before they existed at all. 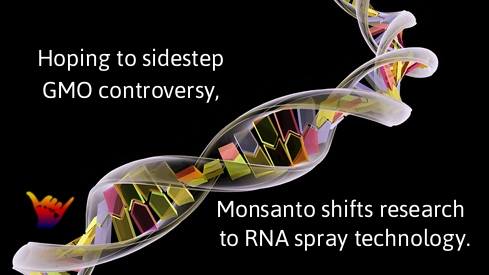 Dr. Carrie Madej warns of the nanotechnology used in the rushed vaccine

Modified RNA has a direct effect on DNA
https://phys.org/news/2020-01-rna-effect-dna.html

Track your movement in the field = Patent WO/2020/060606 was registered on 26 March 2020, by Bill Gates.. That is what this patent is doing; Track the movements of the Beasts ‘in the field’, and is connected to digital currency.

Patent description (you are the sensor, the nanoparticles in the vaccine most propbably):

If you behave, you will have some digital money, from (((them))) to live. The Cube.

Here is the Cube, in the Star of Rephain. 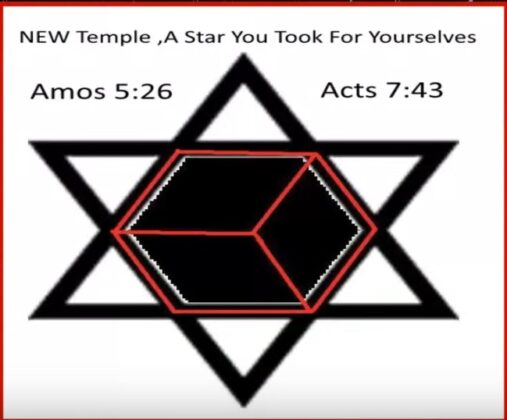 «All these names refer to the `god’ Saturn. The hexagram was brought to the Jewish people by Solomon when he turned to witchcraft and idolatry after his marriage to Pharaoh’s daughter in 922B.C. It became known as the Seal of Solomon in Egyptian magic and witchcraft. David had absolutely nothing to do with the hexagram and that star most certainly did not, in any way, represent God’s people. Solomon gave himself up to satanic worship and built altars to Ashtoreth and Moloch (Saturn).

The martyrdom of Stephen episode in the Book of Acts seems to indicate the star of Rephaim is the symbol of babylonic/cabalistic jewry-the six sided star of Solomon, what the Jews today call Star of David. But David never had any star. Only Salomon when he became an occultist.» (..)

Gill’s Exposition of the Entire Bible explains it this way;

The Alexandrian copy reads «Raiphan»; some copies read «Raphan»; and so the Arabic version; others «Rephan»; the Syriac version reads «Rephon»; and the Ethiopic version «Rephom». Giants, with the Hebrews, were called «Rephaim»; and so Mo, who is here meant, is called «Rephan», and with an epenthesis «Remphan», because of his gigantic form; which some have concluded from the massy crown on his head, which, with the precious stones, weighed a talent of gold, which David took from thence, 2 Samuel 12:30

( ) .. in the Ishmaelitish and Persian languages, signifies Saturn; and so does Rephan in the Egyptian language: and it is further to be observed, that the Egyptians had a king called Remphis, the same with Apis; and this may be the reason why the Septuagint interpreters, who interpreted for Ptolomy, king of Egypt, put Rephan, which Stephen calls Remphan, instead of Chiun, which they were better acquainted with, since they both signify the same deity, and the same star; and which also was the star of the Israelites, called by them because supposed to have the government of the sabbath day, and therefore fitly called the «star of your god».

Moloch, Chiun and Remphan are all names for the star god, Saturn, whose symbol is a six pointed star formed by two triangles. Saturn was the supreme god of the Chaldeans. 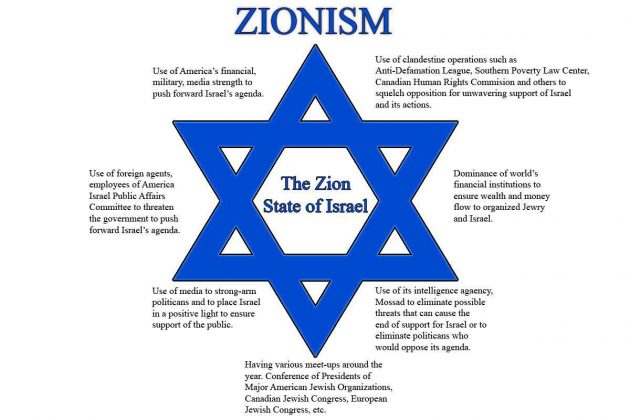 So Mo, Chiun, Rephan, or Remphan, and Remphis, all are the same with the Serapis of the Egyptians, and the calf of the Israelites; and which idolatry was introduced on account of Joseph, who interpreted the dream of Pharaoh’s kine, and provided for the Egyptians in the years of plenty against the years of famine, and was worshipped under the ox with a bushel on his head.

Look up Saturn’s north pole and south pole images! It’s the 6 point star or Hexagram. And the south pole has all seeing eye aka eye of Horus.

Saturn is a Roman God that is the same as Greek Cronos. See Webster’s unabridged dictionary 2nd edition.

Matthew Pooles Commentary on Acts 7:43 “whether Saturn was intended by this, as some think, or Hercules, as others”

(((They))) want to add a third strand of chromosomes comprised of programmable DNA matter.

How was it during the days of Noah? The human race had corrupted DNA due to the intermarrying between the Fallen Angels and humans. The parallel is clear. When men decide to corrupt their DNA by merging it with machines, then it will be like it was in the days of Noah.

There will be war coming for the Temple of God. (Daniel 2:44)

“Rephaim” which in Hebrew may be interpreted into not only “ giants/ sons of the Nephilim” but the connotation includes as well: “walking( giant) living dead ones”, that is the spiritless biorobots (((Klaus Schwab))) imntends to create. Himself and Bill Gates making themselves ‘as gods’ (2 Thessalonians 2:4, Genesis 3:5, Ezekiel 28:2, Ecclesiastes 3:18, Romans 1:22). 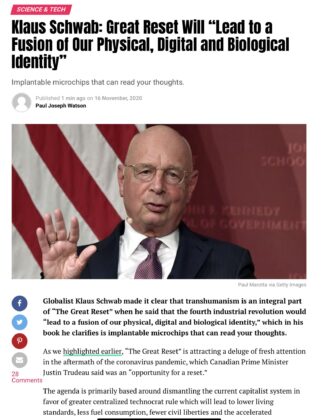 Bertrand Russell, The Impact of Science on Society
Simon and Schuster, New York, 1953

Pages 50-51:
«Fichte laid it down that education should aim at destroying free will, so that, after pupils have left school, they shall be incapable, throughout the rest of their lives, of thinking or acting otherwise than as their schoolmasters would have wished. But in his day this was an unattainable ideal: … In future such failures are not likely to occur where there is dictatorship. Diet, INJECTIONS, and injunctions will combine, from a very early age, to produce the sort of character and the sort of beliefs that the authorities consider desirable, and any serious criticism of the powers that be will become psychologically impossible. Even if all are miserable, all will believe themselves HAPPY, because the government will tell them that they are so.»

What is the promise of The Great Reset ?

«Nobody owns anything.. and everybody is happy» …. says antiChrist (((Klaus Schwab))). About as a dog do not own anything and are happy when the Owners throw it a bone.

The people without spirit of God, they worship and believe in Government, not in God.. Word of God declares all truths upfront, who else than the Creator can know the development of all living things in advance? Those people who have given all their will and own power to corrupt and lying satanists in the Government, they are already cattle, they are finished already. The vaccine will not do them so much more harm, as they already are in the passive mode of existence, like cattle, like dogs, eagerly waiting for (((them))) in their Government to throw them a bone now and then.

» In the future, we will eliminate the soul with medicine. Under the pretext of a ‘healthy point of view’, there will be a vaccine by which the human body will be treated as soon as possible directly at birth, so that the human being cannot develop the thought of the existence of soul and Spirit.
‘
To materialistic doctors, will be entrusted the task of removing the soul of humanity. As today, people are vaccinated against this disease or that disease, so in the future, children will be vaccinated with a substance that can be produced precisely in such a way that people, thanks to this vaccination, will be immune to being subjected to the «madness» of spiritual life.
‘
He would be extremely smart, but he would not develop a conscience, and that is the true goal of some materialistic circles.
‘
With such a vaccine, you can easily make the etheric body loose in the physical body. Once the etheric body is detached, the relationship between the universe and the etheric body would become extremely unstable, and man would become an automaton, for the physical body of man must be polished on this Earth by spiritual will.
‘
So, the vaccine becomes a kind of arymanique force; man can no longer get rid of a given materialistic feeling. He becomes materialistic of constitution and can no longer rise to the spiritual «.

The Nephilims or The Serpent Seed – wants to make everybody else lost for Heaven and for God as themselves- they wants to make everybody a Nephilim.. means a DNA bastards. a mix of man and macine today. It was the same thing happening in the Days of Noah, when humans copulated with Nephilims – fallen angrels – had children with them and destroyed their DNA >> lead to the Flood. God couldnæt and cannot accept his Creation to be completely destroyed like that.

So we can anticipate that God will make His move, sooner or later.

Don’t go there. Stay away from their remedies, their sorceries. Whho belives there is any good in satanists anyway, that (((they))) wants you any good?

The Zion of the Jews is not only Israel. It is the World. Proven by what we see happen today, and proven by Gods warnings to us Christians in the Bible about the Endtimes scenario.

When the talmudic Jews come into their Zion, there will be no room for any thinking others, especially not Christians. There will be the talmudic Rulers, and all the cattles (like in bolshevic jewish USSR).

But first they need to make all humans docile and do as they are told, destroy the DNA’s that is mostly a risk of opposing their World leadership. The medicine for that is the vaccine. After the bodily Temple is destroyed, there is no environment for the Holy Spirit to enter. The Temple is compromized. God can not help those who take the vaccine by sending them the Holy Spirit.

According to occult laws, the satanists must always advertise what they intend to do. Revelation of the Method it is called. It is now giving more sense what happened at the Zion Olympic in London 2012. 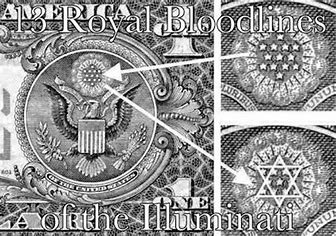 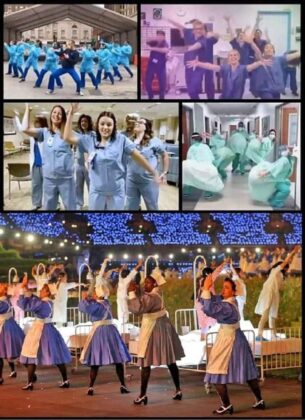 According to the Bible, the talmudic satanist antichrist Babylonian Jews will not succeed with their plans.. Read in Revelation 18:6, 7, 8.

But they are about to create lots of hybrids:

Days Of Noah Reloaded – Hybrids Walk Among Us

Dr. Andrew Kaufman: They Want To Genetically Modify Us With The COVID-19 Vaccine

Those who would give up essential Liberty to purchase a little temporary Safety, deserve neither Liberty nor Safety.