Former Christian nations is being imposed Jewish sodomite traditions (The Great Reset, New World Order). We know the end of that story, the historic result of that traditions. As in the days of Lot, ref. Luke 17:28,30. The blaspheming of Jerusalem – Gods own eternal City – have some practical consequences. Do not shoot the messanger. Not my fault. The Bible tells us so.

Love is to warn the people of Israel to get out before there is fire from Heaven to devour them at Judgement Day, and the Jews of the World NOT to impose their pervert customs and tradition on the Christian nations of the World, karma («reap what you sow») would shoot back at them for it. Jesus as King of our kings, will not appreciate it, and He is the Ruler of the Universe, on the right side hand of God Almighty, not the Jews.

«But the men of Sodom were wicked and sinners before the LORD exceedingly.»
Genesis 13:13

«Hear the word of the LORD, you rulers of Sodom; listen to the instruction of our God, you people of Gomorrah!»
Isaiah 1:10

«The look on their faces testifies against them; they parade their sin like Sodom; they do not hide it. Woe to them! They have brought disaster upon themselves». – Isaiah 3:9

«Their bodies will lie in the street of the great city–figuratively called Sodom and Egypt–where their Lord was also crucified.»
Revelation 11:8 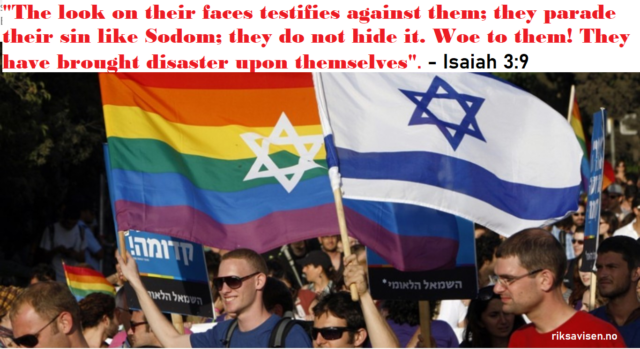 17 These men are springs without water and mists driven by a storm. Blackest darkness is reserved for them.
18 They proudly boast about their sins and conquests, and, using lust as their bait, they lure back into sin those who have just escaped from such wicked living.
19 They promise them freedom, while they themselves are slaves to depravity. For a man is a slave to whatever has mastered him.
20 And when a person has escaped from the wicked ways of the world by learning about our Lord and Savior Jesus Christ, and then gets tangled up with sin and becomes its slave again, he is worse off than he was before.» – 2 Peter 2:18-20

You aren’t saved by being good, the Satanists say, so you might as well be bad. Do what you like; be free, they claim, just like the Serpent lured Eve into temptation in the Garden of Eden, «you can be gods» do any deprave sexual act you want, without problem, is their gospel.

But these very teachers who offer this “freedom” from Gods Law are themselves slaves to sin and destruction. For any man is a slave to whatever controls him. Lust controls this perverts.

The lesson learned is: NEVER let the Jews (Esaus children, the Edomites) rule any nation. They will pervert and destroy any nation they make their innfluence. Esau the oldest should serve the younger Jacob-Israel (white Caucasians, Genesis 25:23), but the Bible say at some points in history Esau children (‘Jews’) should break Jacobs «yoke» (Gen 27:29, 40), break free, free to make the World satanic and free for imposing on the rest of the World all kind of carnal perversities.

Sodomite Jews of Gog & Magog blaspheme the Holy City of Jerusalem only by their presence there, that is the last thing they do before Judgement Day, and Jesus returns, ref. Rev. 20:9.

Revelation 20:9 : «And they [Gog&Magog] marched across the broad expanse of the earth and compassed the camp of the saints and the beloved city».

From all over the World they came to blashpheming the City where Jesus walked and talked by living there, ecpecially from the atheist communist Soviet (61% of Israelite Jews is coming into their «forefathers homeland» from Soviet).

[compassed, means they have taken sole power in Jerusalem]
Trump gave it to them.

«But fire came down from God out of heaven and consumed them.» – Revelation 20:9

Not so much success. The Storm is coming.

The UN is but a long-range, international banking apparatus clearly set up for financial and economic profit by a small group of powerful One-World revolutionaries, hungry for profit and power.